While my preferred mode of discovering a city remains to just get lost, not knowing anything about Verona other than that Shakespeare chose to set his Romeo and Juliet here, I decided to follow the tour my host at the Alle Torri B&B had with a certain routine drawn onto small print-out city maps for me and two Brazilian girls upon our arrival:

“Follow the Corso Milano. After about 20 minutes you’ll reach the basilica Saint Zeno, one of the city’s 4 most important churches.”

The old town begins once I step through the remains of vast ramparts and past Porta San Zeno.  Saint Zeno, I learn, was one of Verona’s first bishops and is now the city’s patron saint.

“Continue straight until you reach the river. Turn right along the river. About 20 minutes after the basilica you will reach Castelvecchio, the old castle. From the bridge there, you have a nice view of the city.

“There is a museum in the castle. If you want to see it you should get the Verona Card. It gives you free entrance to several of the most interesting places in the city and if you get tired you can ride the bus for free.”

I do as commanded and buy the 48h Verona Card. As so often in Italy, it’s just too good a deal to miss: for €22, I have 48 hours from the moment validation to not only visit the Castelvecchio museum but also all the important churches, Juliet’s house, the sculpture museum with Julia’s tomb, the Teatro Romano, the Arena Romano, the Torre dei Lamberti, and some more museums that I never get around to.

“After the Castel go straight along Corso Cavour to Porta Borsari, an impressive old Roman gate, and on to Piazza Erbe.

“Piazza Erbe is the most important place in town to have a drink, where people meet after work and where you find lots of restaurants.

“Turn left onto Via Garibaldi to the Duomo, the second most important church in the city.

“Next is the Ponte Pietra, the oldest bridge in the city. It’s 3,000 years old. Or at least, half of it. The other half was bombed by the Germans and had to be rebuild. I don’t know which one.”

“From the bridge, you also have a great view of the city. Go there for sunset to see the lights of the city.

“But during the day, it’s even better when you go up the stairs to Castel San Pietro. There is a viewpoint there. But don’t go up there at night. There is not much to see.”

“On the way down you pass the Teatro Romano with the archeological museum.”

The stairs are exactly across the bridge, so hard to miss. Unfortunately, the view from San Pietro is mostly obstructed by large cedar trees, and the museum has been shut since 2012 to better protect the building (an ancient monastery) from earthquakes.

Descending back into the old town, my stomach growls. So I do like many of the students from the nearby liceo and get a budget lunch in one of the numerous cafes and eateries along Via Ponte Pietra, namely the Focacceria where a slice of focaccia is only €1.50.

“When you come back across Ponte Pietra from the other side of the river go left to the third important church in Verona, the Basilica Santa Anastasia.

“Going back to the Piazza dei Signori and Piazza Erbe you go past some very interesting tombs of some of the most important people in the town, the della Scala, and Juliet’s house.”

Wait! Then, where is Romeo’s house? I interjected, grinning at my awesome joke.

“That’s here. But you cannot visit it because it is a private residence. And Juliet’s grave is here, in the sculpture museum. We don’t know where Romeo’s grave is.”

Oh. Hold on a second! Romeo and Juliet is based on a real story?

Yup, turns out that Dante Alighieri (of The Devine Comedy) already mentioned the two unlucky lovers in Verona. From there, the story popped up here and there, eventually made its way to England where a certain William Shakespeare picked it up and wrote one of the most read plays in the world.

I visit the Casa di Giulietta, which is remarkable for being a period palazzo (though little of the original interior remains) and shedding light on the story of two lovers while at the same time being disgusting for the tourists who thing it appropriate to commemorate Juliet’s memory by sticking their bubble gum to a wall and groping the breast of a Juliet sculpture in the yard.

“Near the Piazza dei Signori, you’ll find a sculpture for Dante Alighieri who lived in Verona when he was exiled from Florence.

“There is also the Torre dei Lamberti, the last remaining city tower. It is almost 90m high and has two important bells, which have been calling Veronese to work and to stop working for centuries.

“If you are interested in art, visit the Palazzo della Ragione, which houses the Gallery of Modern Art.

“The last most important church ist San Fermo. It is actually quite interesting because it is really two churches on top of each other and you can visit both.

“Finally, you’ll get to the Arena Romano. Some say it is even more interesting than the Colosseum in Roma.

“From there, you can go back along the Castel Vecchio or you can take the bus.

I end up straying a few times left and right, take it slowly and visit the recommended museums. So I end up touring Verona in a day and a half. But if you don’t have that sort of time, base yourself in Venice for a day longer and plan a day trip–the train takes only 1.5 hours and costs as little as €9 one-way. 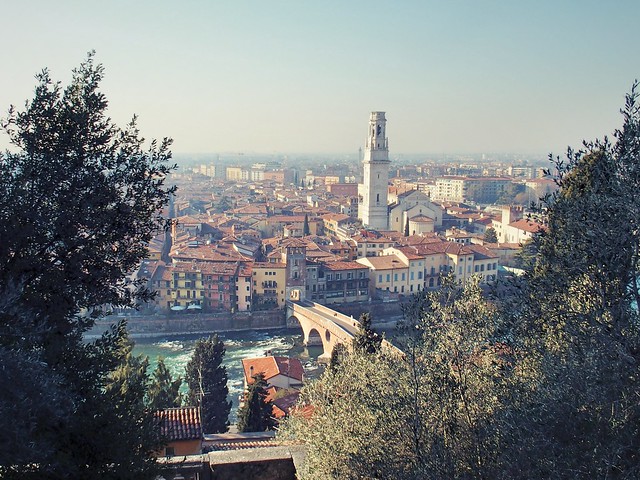