Nothing ever happens in Montenegro.’

What makes young Montenegrins despair is a lucky circumstance for visitors. Most of the people we’ve met on our two-week road trip across the country were warm, welcoming and curious for a chat with us; her stunning nature — monte means mountains, after all — still lays there virtually untouched, waiting to be discovered. 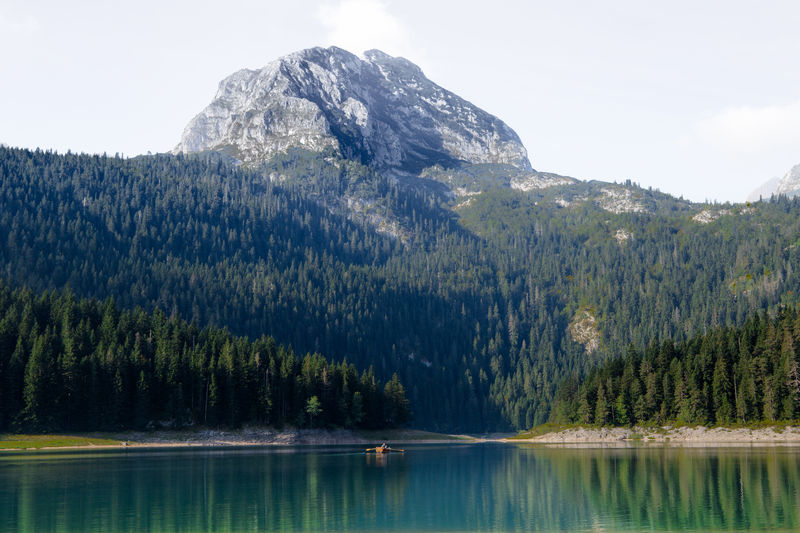 Of course, ‘nothing ever changes’ isn’t entirely accurate. Just look at Budva, which continues to grow from its small walled old town along the coastline and into the sky. The whole country is slowly but steadily being conquered by tourists, which will undoubtedly change the landscape in the coming years.

Montenegro, where the crow never flies further than 250km to the next border has truly been blessed with some of the best of what mother nature has to offer: Her coastline includes one of Europes longest beaches and makes Italy across the Adriatic from her blush. Her mountain ranges, though not as vast as the Alps, average 2,000m and do not hold back in drama, vista and hidden gems like Europe’s deepest and longest canyon, and her dozens of crystal clear lakes, among them southern Europe’s biggest, ooze with mystery and romance.

Add to the mix some of the friendliest, most peaceful people you’ll ever meet, and a varied, ingredient-focused cuisine, and you’ve got yourself a perfect destination for pretty much any type of tourist or traveler.

A short introduction to Montenegro

The first evidence of human settlements in Montenegro dates back to 1,000 BC and the Illyrians. At the coast, they were first pushed back by the Greeks, and in the 2nd century BC the Romans took over, making what is now Montenegro part of the Dalmatia province. After the decline of the Roman Empire, Montenegro found itself at the borderline between Eastern — Ottoman — and Western — mainly Venetian — forces.

In 1878, Montenegro was the 27th country in the world to be recognized as an independent state (by the European powers).

Montenegro — ‘black mountain’ — is actually the Latin/Italian name of the country. The Montenegrins call their nation Crna Gora, which, however, can also be translated to ‘black mountain.’

The official language in Montenegro is Montenegrin, a variation of Serbo-Croatian, the language spoken in many of the Balkan countries. So hold on to your dobor dan and your hvala that you learned on your last vacation in Croatia.

Though it is without a doubt a multi-ethnic state — in the 2003 only 45% of the population described themselves as ‘ethnically Montenegrin,’ another 28% as Serbs, 8% as Bosniaks, and 5% as Albanians — those (perceived) allegiances seem to shift from census to census. What unites people is their adoration of national hero Petar II Petrović Njegoš, their pride in the local cuisine, their love for tennis legend Novak Djokovic (whose father is from Montenegro), and their resignation with the government.

About 70% of the people of Montenegro follow Eastern Orthodox Christianity (mostly Serbian Orthodox), which is widely visible in the numerous monasteries with their intricate interior decorations scattered across the country. About 20% are Muslims. The historical sense of unity and tolerance has meant that Montenegro mostly managed to escape the religious tensions of the last Bosnian War.

Though not yet part of the EU (or Schengen), the country currently uses the Euro as its currency. Because a lot of the accommodations and restaurants are small, family-run businesses, for the most part, do not accept credit cards; ATMs are, however, quickly found in all cities and tourist spots.

The tourism infrastructure is already vast in as there are plenty of accommodation and dining options in all parts of the country.

Almost a quarter of Montenegro’s 620,000 citizens lives in and around the capital, Podgorica. The city is otherwise not a top tourist destination. Neither is Niksic, the country’s second city. Both owe their size mainly to the fact that the otherwise mountainous terrain has opened up onto vast plains here, allowing easy settlement, large-scale agriculture, and a modest industry.

The four touristically interesting cities are all within less than 50km of the coast: Kotor, Budva, Bar, and Cetinje (a former capital and today Montenegro’s ‘cultural capital’).

The country’s five national parks cover roughly 8% of its area:

Planning a trip to Montenegro

Montenegro is tiny. The route by car from Ada, the southern-most point, bordering the sea and Albania, to the northern-most point, the border-crossing near Metaljka in Bosnia and Herzegovina, takes less than 6h and is barely longer than 300km.

This makes Montenegro a country perfect to explore on one short vacation while leaving space to come back ever and again for leisure activities.

To allow us utmost flexibility– mainly to stop and snap the stunning landscapes — my friend Resi di Berlino and I rented a car. We found a deal on billiger-mietwagen.de: 12 days, fully insured, no excess, unlimited kilometers, two drivers for €376. The main roads are somewhat new and make driving a breeze. However, further into the country, the two-lane highways are replaced by narrow serpentine roads requiring nerves and patience from the driver. The only toll road is the Sozina tunnel, connecting the coast and Skadar Lake (toll fee is€2.50).

If you decide against your own car, most of the country is easily navigated on public transport; this means mainly buses plus a small but useful train network running from Podgorica to Niksic, and from Bar at the coast (via Podgorica) to Belgrade in Serbia. Neither Kotor nor Budva is connected by train.

As a slow traveler, I took almost two whole weeks to roam the country, however, it is easily doable in less time. If you have only one week and you want to keep it simple, I recommend you begin by booking four nights in Budva to eat your fill of fish and seafood and explore. In a nutshell, this is my suggested 1-week itinerary for Montenegro:

Powered by GetYourGuide. Become a partner.

Logistics of travel to & in Montenegro


This post was first published in October 2016 and was updated in January 2018.

Backpacking East Timor — All The Info You Need Before Your Trip

Traveling and even more so backpacking East Timor is more challenging than you’ll find it in most other destinations in Southeast Asia. Information is scarce. So is local transport. And to boot things are constantly changing. This travel/backpacking guide for