I touched down in Pisa mid-July. The flight from Bordeaux was cheaper than into anywhere else in Italy. I was not even going to stay, instead move straight on into Florence, but then I thought it would be foolish to go back and forth and booked myself for two nights into the only hostel in town, the conveniently named Hostel Pisa.

When I set foot onto the tar outside the airport, it was already evening but the sun hadn’t set, yet, I quickly realised what I had done: I was visiting Tuscany in the hottest time of the year. 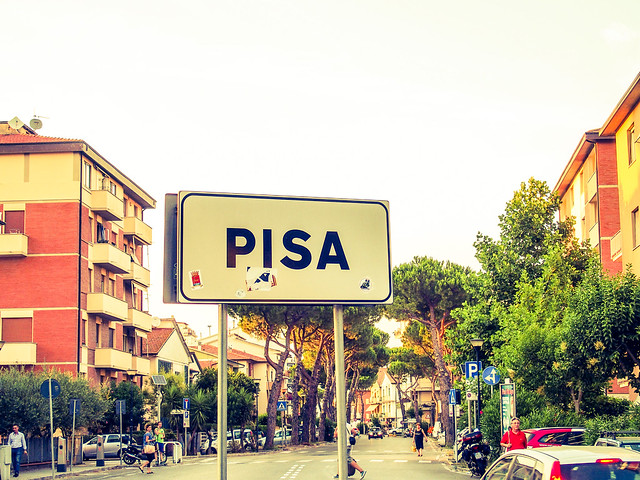 The next morning I grabbed a map of the city from hostel reception and made a plan. To see as much of the old town as possible in a day I decided to make my way North to the Leaning Tower vaguely along the remains of the old town wall and the Roman aqueduct. 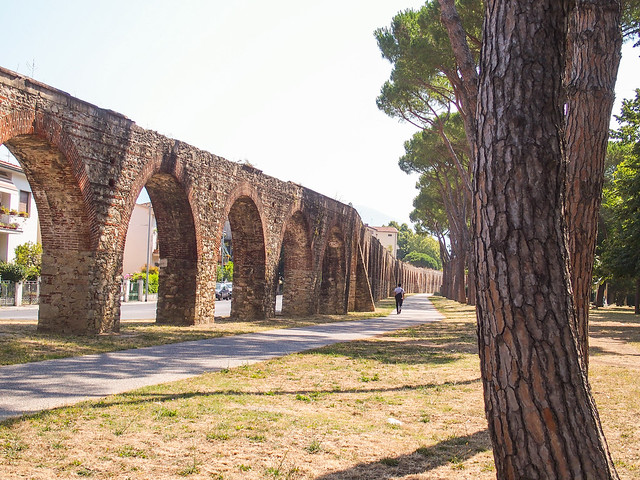 Pisa is an ancient city. Its exact founding date is unknown. But remains show that the city, than much closer to the sea, and its river, the Arno, shippable, had already been a thriving port under the Etruscans, trading with the Greeks and the people in North and Western Europe.

After the fall of the Roman Empire the Republic of Pisa continued to grow. At the beginning of the Middle Ages, it was, along with such glamorous names as Genoa and Venice, considered one of the most important commercial places in Italy. It was during that time, the 11th century, that the foundations for what is now one of the World’s most recognizable landmarks were laid: the Piazza dei Miracoli.

First they build the imposing duomo which looks like it was made completely from white marble. A few decades later followed the baptistery which was supposed to be joined by a bell tower. But that tower was never really finished — lack of funding and, well, issues with statics…

I reached the square from Via Cardinale Maffi Pietro before noon and was ready to be underwhelmed. 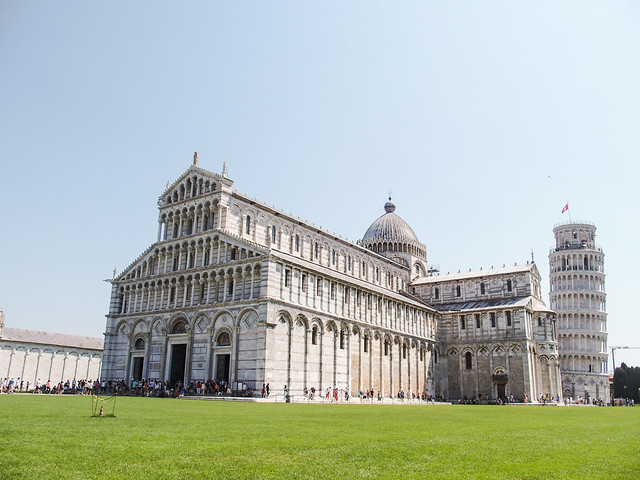 But the three buildings gleaming in the July sun looked truly miraculous.

The tower itself seemed tiny and I was almost distracted by the hoards of tourists, all trying to get that one shot where it looks like their keeping the tower from falling…

However, once I took the time to study the details — the fine marble works, the subtle differences in color, the columns I couldn’t help but be once again smitten by the skills of Christian architects. Even almost a thousand years ago, with technology that mostly relied on human strength, they managed to create something that is at the same time imposing and delicate.

I went inside the cathedral, but opted to not pay for the baptistery or the Mudeo dell’Operai. Instead I found a cheap lunch which I enjoyed in the calm shade of the garden of one of the newer university buildings before moving on to the Piazza Cavalieri and the marvellous decorations outside the Palazzo della Carovana. 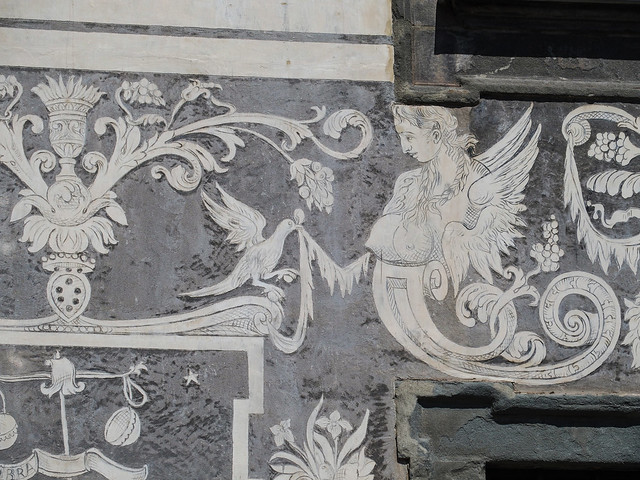 Trying to flee from the afternoon heat I slipped into one church and then another, passing by old palazzi here and there, strolled along the river and eventually gave up, leaving the old town with a big cone of home-made ice cream from La Bottega del Gelato in Piazza del Pozzetto towards the pleasant cold of my air-conditioned hostel. 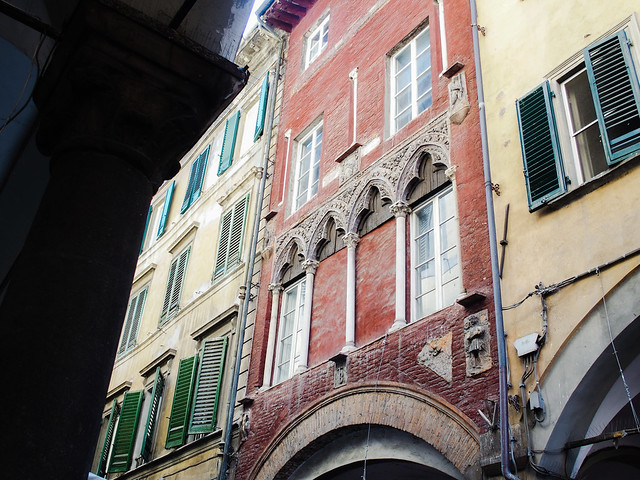 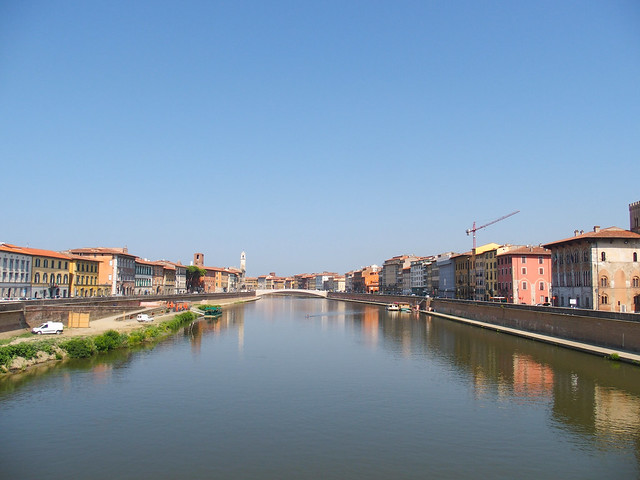 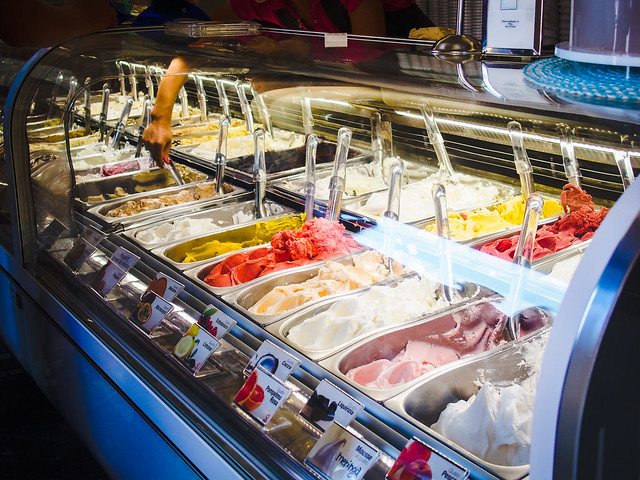 Scroll through the full Flickr album with my impressions of Pisa: 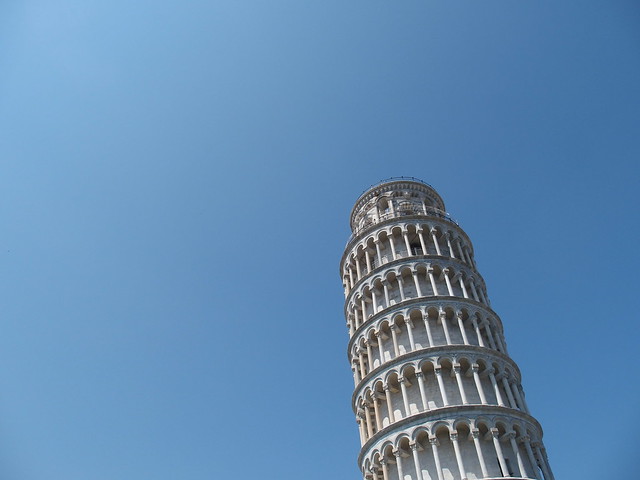