Down West: Why I’m Traveling Overland With African Trails

The tour is booked! Here’s my thought process on why in the end I decided to go with African Trails Overlanding.

I have been thinking about traveling through Africa for a little while. However, for months I declared it impossible: for financial but mostly for security reasons. When it became apparent that career-wise I was stuck somewhere between a rock and a hard place taking indefinite time off from my career seemed the only sensible way out.

So there I was: back at the point where I wanted to figure out how with a limited budget I could make a journey through Africa happen after all. While I quickly determined that – also thanks to the TaZaRa train line – the East should be comparatively easy to travel as single-white-female-on-a-budget, the West was giving me headaches. I knew I could get to Morocco and through Senegal and Ghana. And I was feeling fairly confident about Namibia as well. But how to get from one to the other?

However, reasonable as I am (and with my parents in my ears): after pondering my options with hours of research on the web it did come down to the following rationale:

Though I somehow still wish I was naive enough to have decided to simply start somewhere and hope for the best I did opt for an organized tour with African Trails. that will take me all the way from Gibraltar to Cape Town in 22 weeks.

I chose them because first of all there are less than a handful of companies offering a long trek that will take me all the way through West Africa. We will go from Gibraltar to Cape Town in 22 weeks, passing countries like Mali, Togo, Nigeria, both Congos, and Angola.

Africa Trails is simply the cheapest option: I will pay a grand total of 4,500 GBP (the company is British) for all transport and accommodation, roughly a third of my meals, and even some sightseeing (safaris in Ethosha National Park, for example, are included). That’s roughly 50 USD per day.

Click on the map below to get redirected to the African Trails website where you’ll find a browsable version. 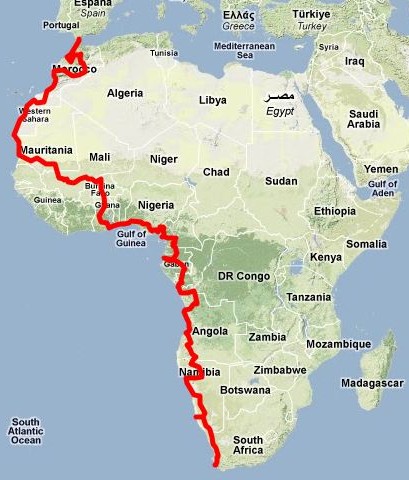 First part of the journey: Gibraltar to Cape Town with African Trails