A day in Rome — When in doubt it’s a church, and other things I learnt

I had not planned to go to Rome now. But my first Italian WorkAway starts only on Friday. I am leaving Berlin on Wednesday. So I might as well start here.

Coming in via Fiumicino airport I get a first taste of Italy: the queue for the bus is lose, and when the car arrives everyone scrambles for a seat.

The remainder of Wednesday is for buying a ticket to the South at the central bus station.

I extend the hotel’s generous breakfast buffet for two sandwiches for lunch. One and a half days in a city like Rome is nothing. But I have to start somewhere. So I head over to Termini to find the bus to Vatican City. No many signs, no plan, no confidence in my Italian mean that I search for a few minutes and then get the slower bus. As they say, ‘Many roads lead to Rome.’

What I had guessed on the bus on the way into Rome from Fiumicino becomes clearer: history, architecture, grandeur pass by whenever I peek through the window. Can’t wait to walk this.

I leave the bus outside Vatican City, walk along Via della Conciliazione into the Holy Sea. The wide boulevard allows for perfect views of San Pietro, the Catholics most important church. The line starts just a few steps from the Vatican Post Office container and goes all the way along the colonnade that frames St Peter’s Square. 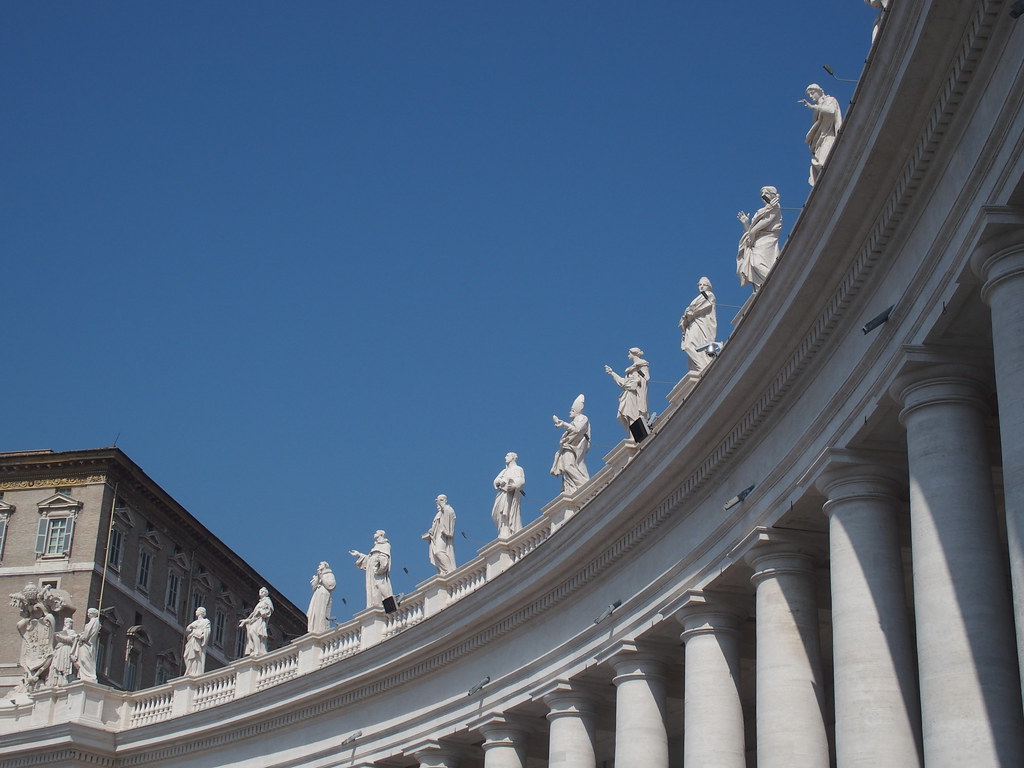 A woman in her forties approaches me, ‘Is that the line to get into the dome?’

I don’t really know. ‘I think so. But to be honest I am just following everyone else.’

After a few minutes a familiar face: Teagan, a roommate from my dorm at the Alessandro Downtown. She is Canadian, exploring Italy on her own and looks a bit disappointed. She had tried to get into the Sistine Chapel. But it is closed today. We are not sure what holiday it might be. ‘Do you mind if Ijust come with you?’ I don’t.

After an hour or so we arrive at the security check. Yes, this is indeed the entrance to the cathedral. When my belt sets off the metal detector none of the guards reacts. They are just concerned about glass bottles in our backpacks. 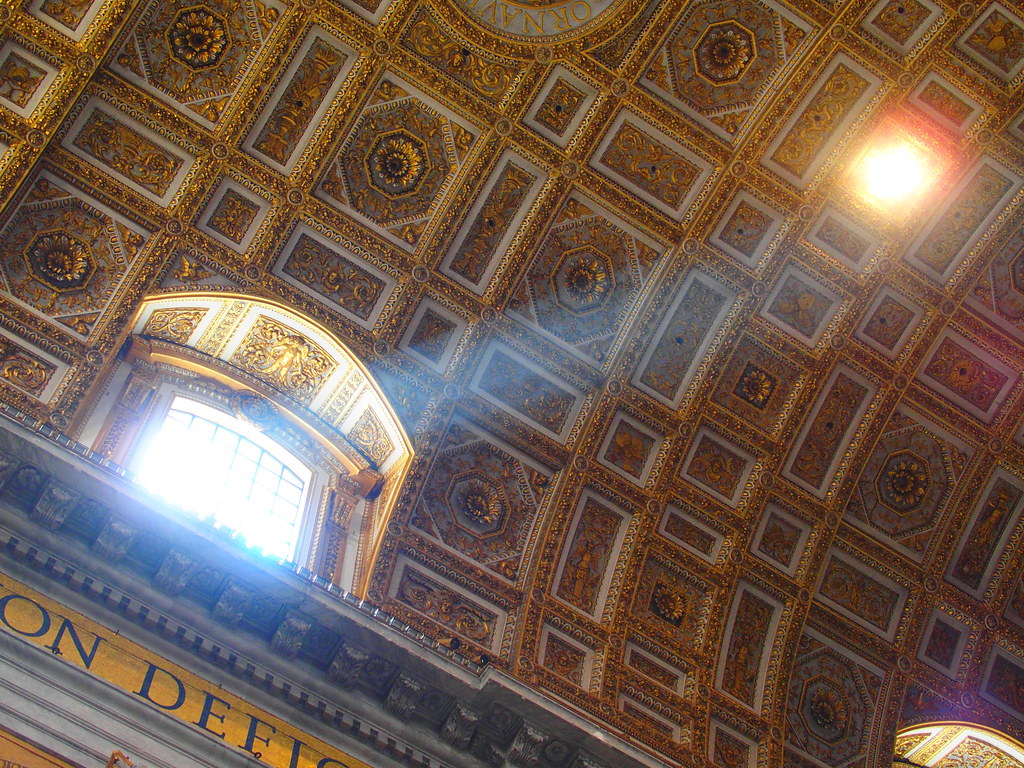 As Teagan and I wander through the building there is an uproar on the left. People move as quickly as the location permits. Lots of photos are being taken. For the rest of the day I will pretend that I’ve seen the Pope somewhere in the distance.

Since neither of us has read a guide-book we just follow the signs. One says ‘To the dome’. We’re confused. Isn’t this the dome? We decide to invest 5 euros regardless and are not disappointed.

Long winding staircases take us first up into the large dome in the center of St Peter. We marvel at giant murals which are actually mosaics. Then we step out — along with about 100 other people — onto the cupola. 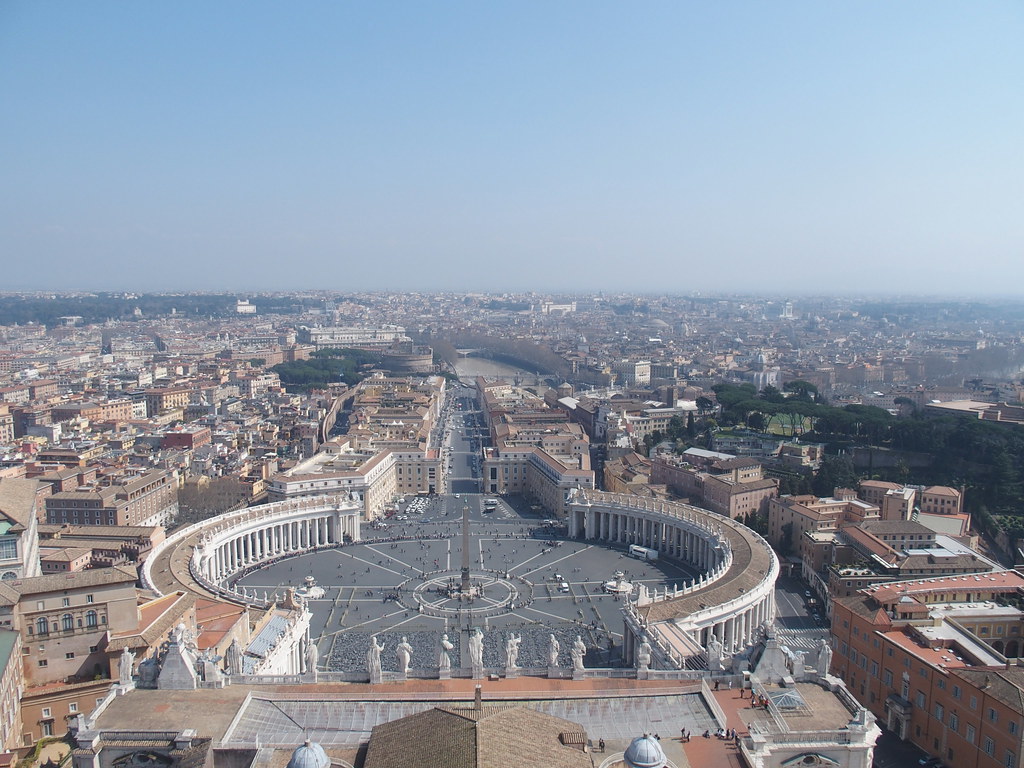 We have lunch on the roof of St Peter and study the map that the concierge at the Alessandro had given us. There is not much time. So we devise a plan.

To get to the Spanish Steps in time for the afternoon sun we circumvent Castel Saint Angelo, stop briefly at the Augusteo, and enter every church along the way to the Piazza del Popolo. We turn back onto the Via del Corso, turn a few more times and end up at the elegant stairs below Trinita dei Monti. They are heaving with people who had the same idea. I realize there is one thing that would make this moment in tourism even better: real Italian ice cream.

We have to search along a handful of small streets, turn away in disgust from restaurants trying to lure us in with their heavily laden displays. But finally there it is, in Via della Croce: Cioccogelateria Venchi. 2.50 euro for a small cornetto into which the girl behind the counter towers 2 flavors — dark chocolate and Venchi cream.

Back at the steps we join the crowds, enjoy our gelato, and watch the world pass by. 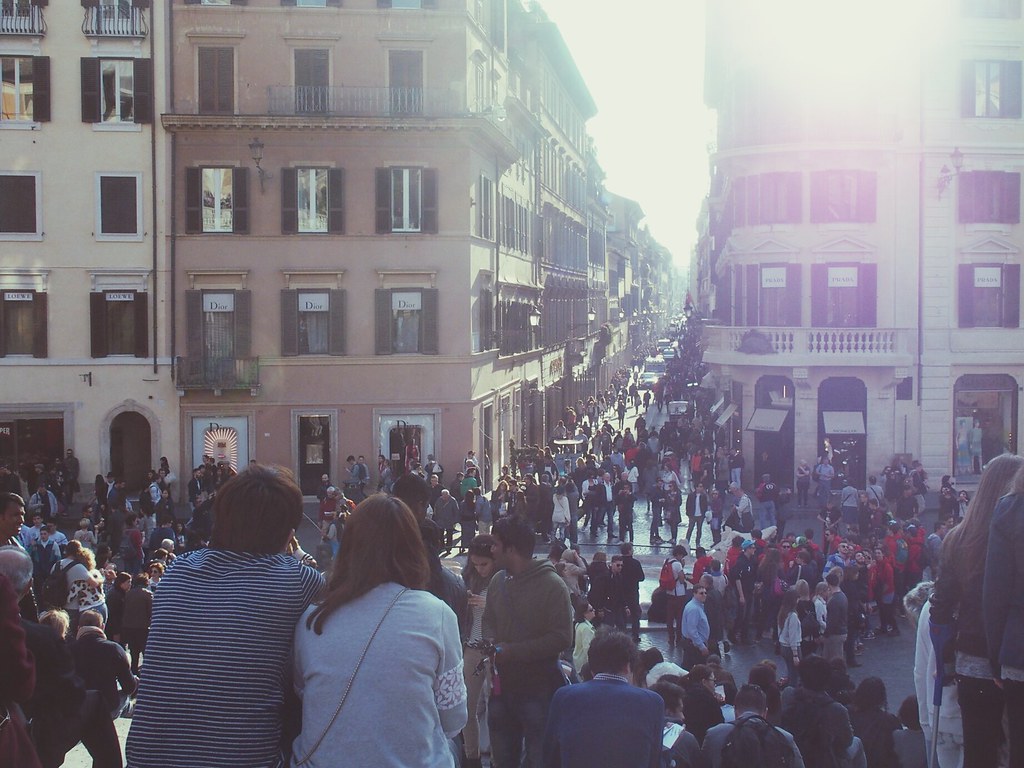 Yesterday, on the way back from the bus station I had found a one cent coin while waiting at a red light. I want to toss that coin into the Fontana di Trevi.

To our great disappointment the fountain is under construction. Tourists are filing to step onto a small walkway across the empty basin. I am not a tourist.

Teagan finds a puddle of water in a smaller basin. I have to do what I have to do and throw the cent behind me. I miss. But the photo doesn’t show that. 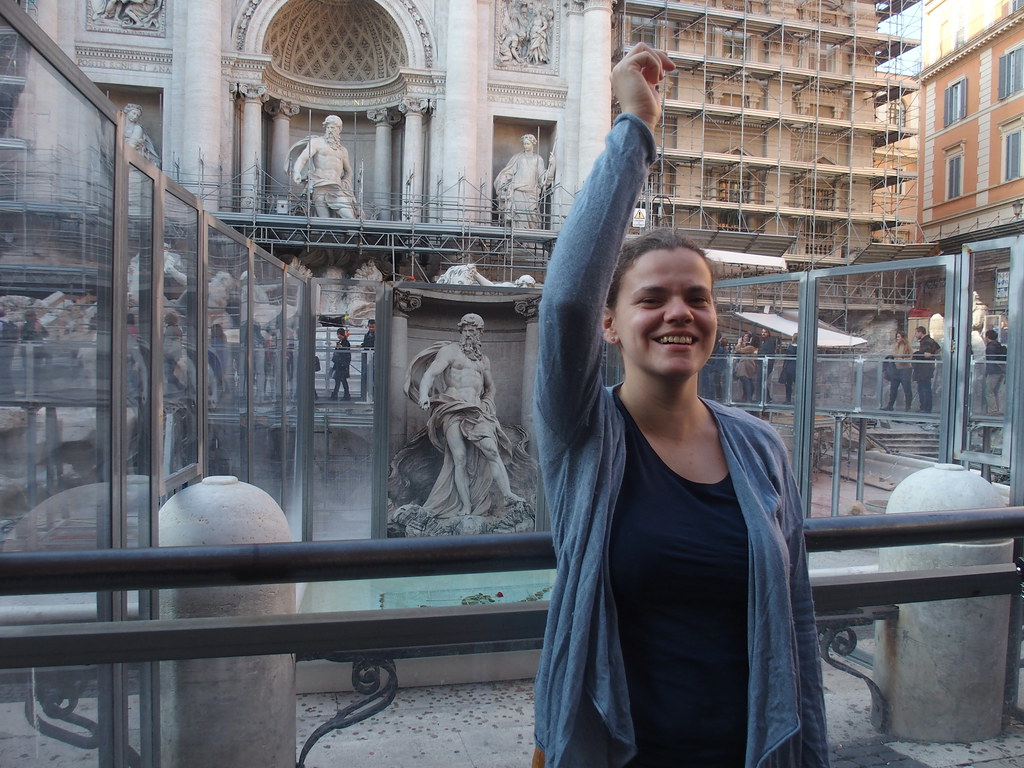 We check the map again to see what’s left to see. Somebody at the hostel had told us the Pantheon was rather impressing.

It’s a church. We didn’t know what the Pantheon was. But when in doubt you can always assume that in Rome it’s a church.

On route to the Vittorio Emanuele Monument we notice how many Egyptian stelae are dotted around town. Did Cleopatra send them?

The Vittorio Emanuele Monument, though less than 150 years old, is so colossal it almost overshadows all the other sites between Piazza Venezia and Colosseum. And we’re talking several fori built by Roman emperors. 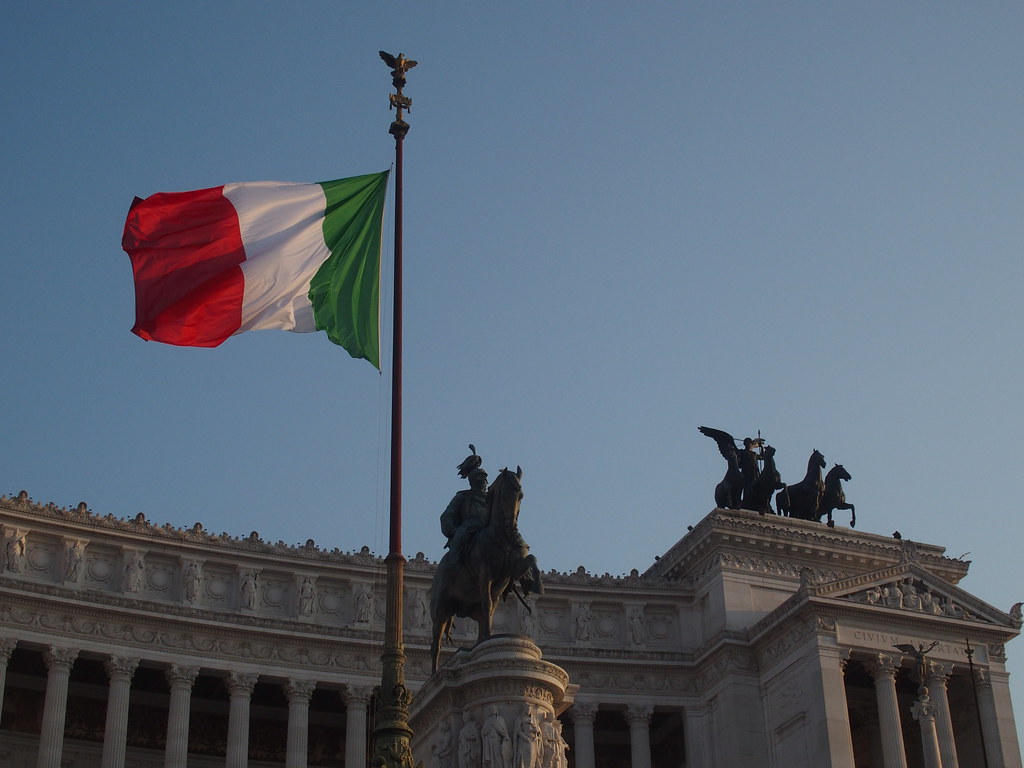 The Forum Romanum, the Palatino and the Colosseo are Rome’s main sights. But today I have only time for a few quick snaps.

Teagan and I are sharing pasta, pesto, insalata and a chocolate bar for dinner. 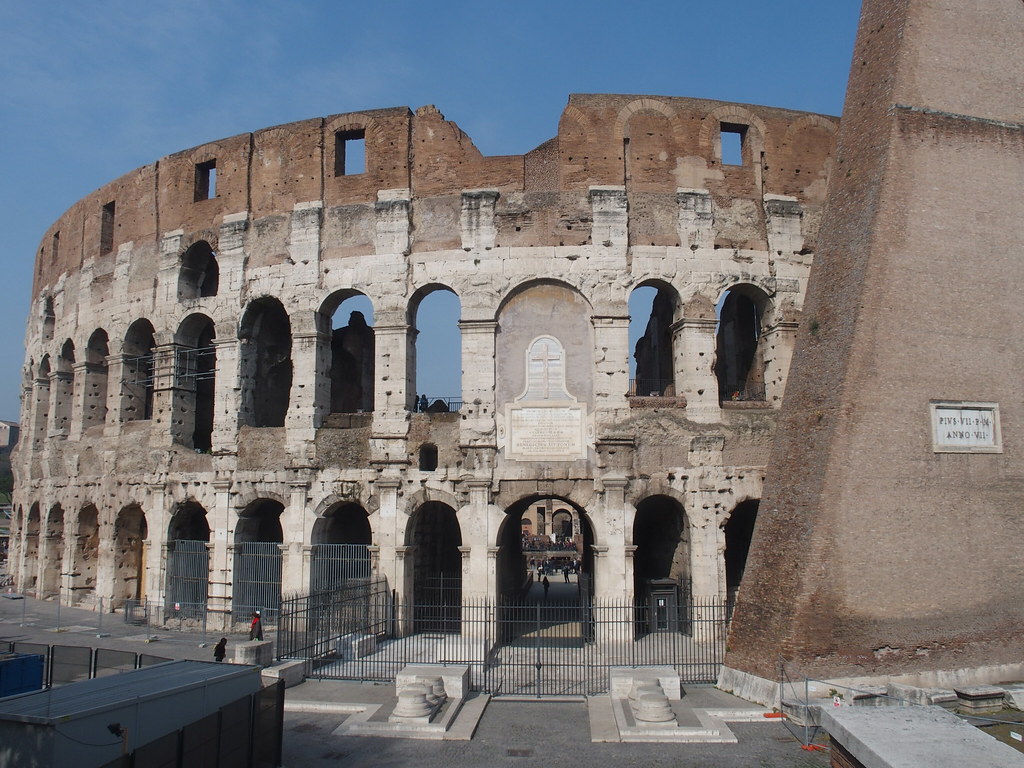 My Complete Guide To All 5 Batu Caves (Day Trip From Kuala Lumpur, Malaysia)

Batu Caves is one of the top sights in Kuala Lumpur and just like the Petronas Twin Towers (aka KLCC) and a meal in Chinatown the caves shouldn't be missed on your visit to Malaysia's capital. All the Batu Caves (there