To keep me entertained while saving for my next trip (due this coming spring) I’m checking out fun stuff to do in Berlin. Two nights ago I went to a kundalini meditation.

I’d found the Osho Studio on be-more-ecofriendly app cotastic. The chance to try out a free meditation sparked my interest, and ecotastic Fabian’s warning that the vouchers might soon be gone my creativity in finding ecotastic things to photograph…
360 points later the voucher was mine. It was time to get some serious relaxing going.

Kundalini (commonly known as a form of yoga) is an active meditation. It’s practised in four phases:

Essentially you spend 15 minutes bending your knees slightly with the music, over and over again, creating ripples that run through the whole body. That loosens you up for phase 2.

More music. But these 15 minutes you’re free to let your body move however it wants (without moving too much through the room – your meditative state might otherwise make you bump into your fellow meditators…). Sweating ensues.

The first 15 minutes between just you and your mind are accompanied by some thinking music. You’re free to sit or stand. Tip: instead of trying to not think, think consciously about how your breath flows in and out of each body part thereby relaxing it.

Time to lie down. No more music. Just you and the moment. 15 minutes rarely pass by so quickly.

Afterwards there’s some chai (sin leche) to slowly come back to the now. 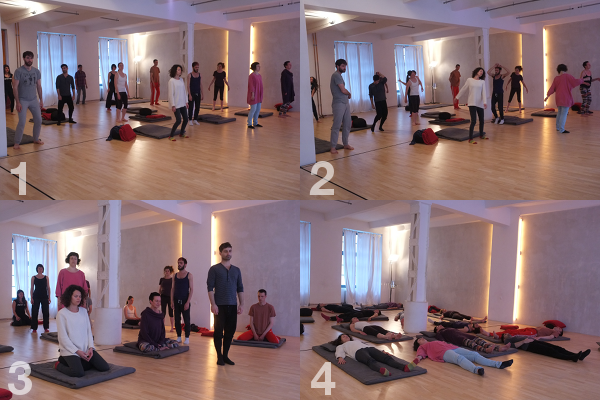 The crowd at Osho this night is a (mostly female) mix of busy girls from the nearby start-ups, looking to unwind after a long day at the computer, middle aged alternatives and sannyasins (followers of Osho, the guru).

Once I got over the embarrassment of the shaking phase and started to ignore the other people in the room I actually had a good, relaxing time. A friend later mused that this is actually the lure of practicing: being in public and not being distracted by the people around you while letting yourself go.

The normal rate of 5 Euros per person makes the experience a fun thing to do with a friend (or an exercise in overcoming embarrassment). For myself I’d say, now that I know how it’s done I’d rather turn up the radio, set an alarm to 15 minutes and afterwards invest the 5 Euros in beer.